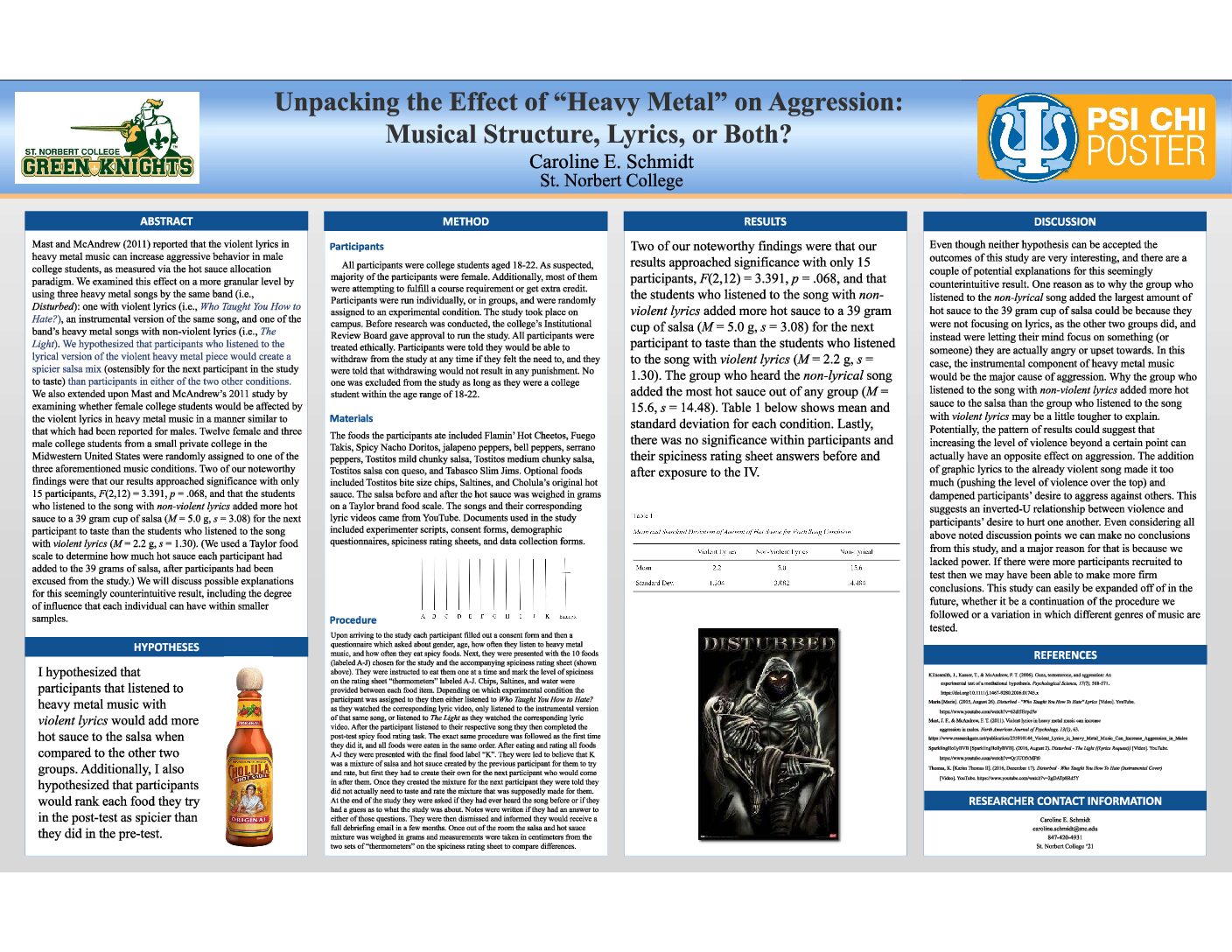 Mast and McAndrew (2011) reported that the violent lyrics in heavy metal music can increase aggressive behavior in male college students, as measured via the hot sauce allocation paradigm. We examined this effect on a more granular level by using three heavy metal songs by the same band (i.e., Disturbed): one with violent lyrics (i.e., Who Taught You How to Hate?), an instrumental version of the same song, and one of the band’s heavy metal songs with non-violent lyrics (i.e., The Light). We hypothesized that participants who listened to the lyrical version of the violent heavy metal piece would create a spicier salsa mix (ostensibly for the next participant in the study to taste) than participants in either of the two other conditions. We also extended upon Mast and McAndrew’s 2011 study by examining whether female college students would be affected by the violent lyrics in heavy metal music in a manner similar to that which had been reported for males. Twelve female and three male college students from a small private college in the Midwestern United States were randomly assigned to one of the three aforementioned music conditions. Two of our noteworthy findings were that our results approached significance with only 15 participants, F(2,12) = 3.391, p = .068, and that the students who listened to the song with non-violent lyrics added more hot sauce to a 39 gram cup of salsa (M = 5.0 g, s = 3.08) for the next participant to taste than the students who listened to the song with violent lyrics (M = 2.2 g, s = 1.30). (We used a Taylor food scale to determine how much hot sauce each participant had added to the 39 grams of salsa, after participants had been excused from the study.) We will discuss possible explanations for this seemingly counterintuitive result, including the degree of influence that each individual can have within smaller samples.

Great job presenting in Gather.Town today. Your topic is so interesting.

Very interesting research, Caroline! I also wonder if your results turned out this way because the violent lyrics made people self-aware, and that level of self-awareness actually served to decrease their aggressive tendencies. Super interesting, great work!