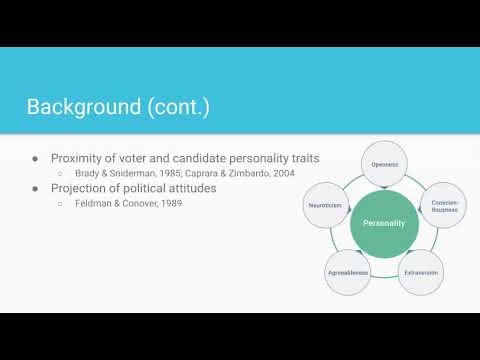 While there is a wide variety of research about personality in the field of psychology, there is still a gap in the political science literature. Within the past decade, political scientists have begun to investigate how personality affects political behavior including candidate evaluations and voting. Generally, this study intends to build upon a burgeoning area of research that will help further explain how individuals may use their own personality traits to make judgments about the personalities of political candidates through psychological mechanisms such as projection. Data for this study will be collected using a survey that asks participants to express their agreement towards statements that describe different elements of personality, including the Big Five personality traits and other measures like need for closure, need for cognition, and need for chaos. Other survey questions will test projection effects and ask about political preferences and demographic characteristics to strengthen the association between individuals’ personality traits and how they behave in the political world. Overall, this research will amalgamate prior studies of personality and political behavior with studies of projection effects in hopes of testing if projection is a valid mechanism for mediating the association between personality and political behavior, as it is clear that personality cannot directly predict how someone will vote or evaluate a candidate.